Gunning for Peace: The Non-Violence Project

In this installment of Pen to Paper, Riz Khan tells you about his work with the Non-Violence Project (NVP).

First of all – here’s the link. That way you can go there and not read my blurb about the organization and learn what it’s all about directly from their website.

…Or, you could stick around for a few hundred words and discover why I decided to become an Ambassador for the Non-Violence Project (NVP)!

I didn’t really mean for you to leave just yet…

Ok – good! Thanks for sticking around.

First of all, you might well recognize the following picture: 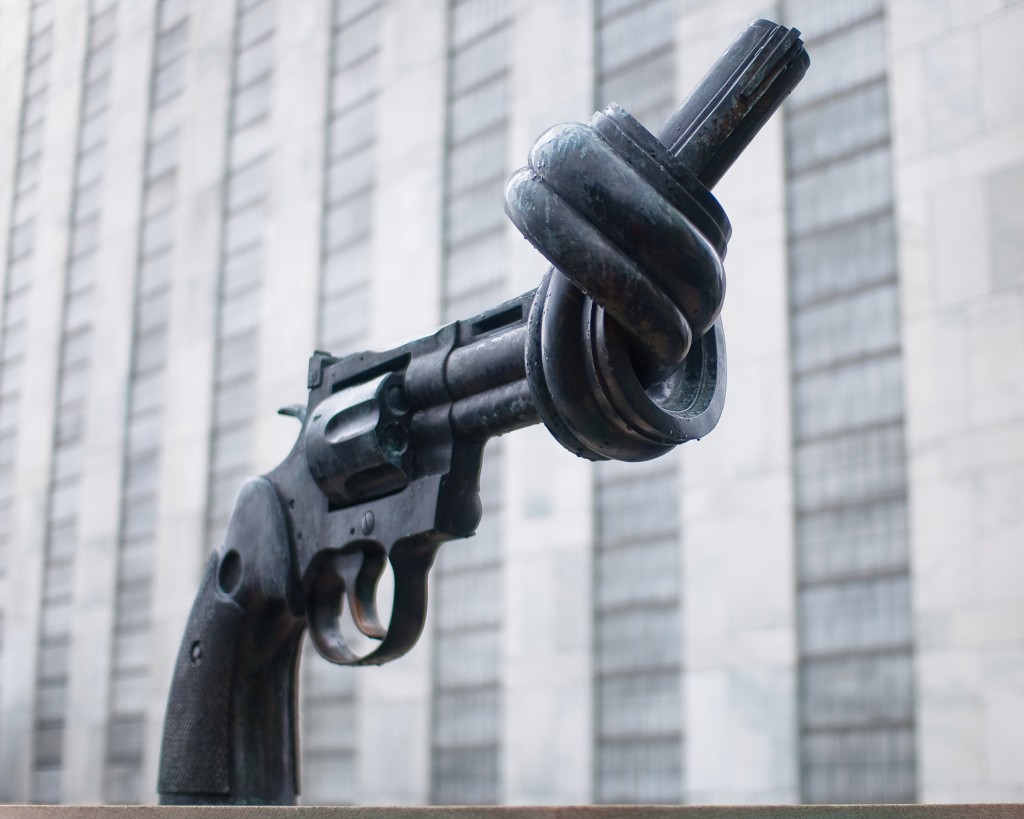 It’s called the Knotted Gun, and it was created in memory of the Beatle, John Lennon who was shot and killed in New York. The Swedish artist who created it, Carl Fredrik Reuterswärd could hardly have imagined how iconic his concept of a revolver with a twisted barrel would become… with a prominent place at the steps of the United Nations Headquarters building in New York – where the original stands… as well as replicas at other locations across the world. Not only that, it has become the symbol for a movement that positively touches millions of lives across the world.

The goal is to make people – particularly young people – aware that conflicts can be solved peacefully. It covers three areas of learning: conflict management, self-esteem building and non-violence.

So, how did I get involved, you’re probably asking by now – heading for your browser?!

Therese Engström, a friend of mine in Stockholm, told me I should meet the founders of NVP – an organization she advises – during one of my many trips to Sweden. (I’ll explain that in more detail one day!) Therese has actually introduced me to a number of interesting projects and people (these Swedes are so creative and philanthropic!),

So, before long, I was sitting in the coffee shop of the Story Hotel (amazing place!) in downtown Stockholm (beautiful city!) with Jan Hellman and Rolf Skjöldebrand (yes – I can pronounce his name properly!)… and quickly agreeing to help spread the word.

“And I’m not the only one”… (geddit?!) – John Lennon’s widow, Yoko Ono, and the other living Beatles, Sir Paul McCartney and Ringo Starr, are also ambassadors for NVP. Imagine! (Sorry – couldn’t resist!)

So what can you do to help?

Well, first of all, start to raise your own awareness of how conflicts can be resolved without resorting to violence and building extreme negativity. Think about how that positively affects your own physiology (anger and hate have a negative impact on your nervous and endocrine systems – I know – I studied medical physiology at university!)

Secondly, learn more about the work of NVP and see how you can be part of a wonderful global movement wherever you are!